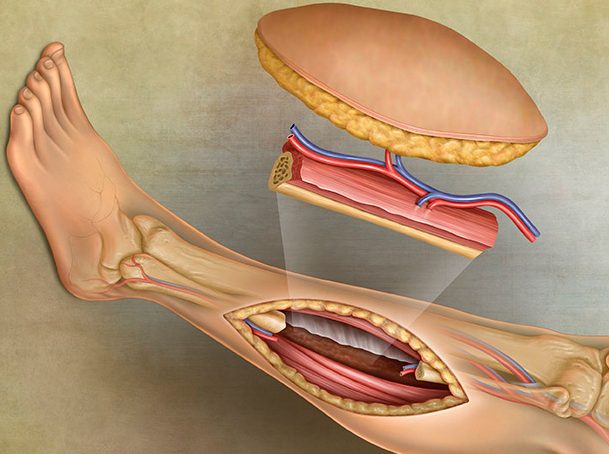 What is a fibular free flap?

A fibular free flap is one way of filling a bony hole in either the upper or lower jaw. It is one of the common ways of replacing bone that has been removed for cancer treatment.

Will I have problems walking?

In the long term removing the fibular bone should produce no problems in walking. You will be on bed rest for a day or two after surgery. Soon after this hopefully, you will be sitting out in a chair. With the help of physiotherapists, you will start to walk at the end of the first week. By the end of the second week, you should be walking near normally and climbing stairs. Very occasionally you may need help (a stick) for a further week or so.

What does the surgery involve?

I will remove one of the bones from the lower part of your leg. The fibular bone runs on the outside of the leg from the knee joint to the ankle joint. It is a small thin bone that can be entirely removed without affecting your ability to bear weight. The fibular bone is removed (the flap) along with two blood vessels, one of which supplies blood to the flap (the artery) and one of which drains blood from the flap (the vein). Once the bone is raised it is transferred to the head and neck and secured in position with small plates and screws. The blood vessels supplying and draining the flap are then joined to blood vessels in your neck under a microscope. These blood vessels then keep the flap alive while it heals into its new place.

Your leg will be placed in a bandage for a week following surgery. Occasionally it is necessary to remove a piece of skin in addition to the fibular bone. If the piece of skin that is removed is large it will need to be replaced with a skin graft.

What should I expect afterwards?

The area of your leg where the bone has been removed is likely to be sore. Regular painkillers will be arranged for you. A small tube is also placed through the skin into the underlying wound to drain any blood that may collect. This “drain” is usually removed after a few days.

All cuts made through the skin leave a scar but the majority of these fade with time. The scar on the outside of your leg runs from just below the knee joint to just above the ankle joint.

Occasionally I may use other flaps such as the lateral thigh flap, scapula flap, latissimus dorsi or pectoralis major dependent on the reconstructive problem.