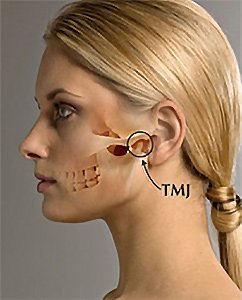 We have decided that the best way to sort out the problems you are experiencing from your jaw joint is to perform “open” surgery. Open surgery involves exposing the jaw joint fully by making a cut in front of the ear rather than using keyhole techniques.

Do I need to take time off work?

Again this varies enormously from person to person. Most people require a week or so off work. It is important to remember that you will not be able to drive or operate machinery for 48 hours after your general anaesthetic.

All cuts made through the skin leave a scar but the majority of these fade with time and are difficult to see when they are fully healed. It may take several months for your scar to fade but eventually, it should blend into the natural folds and contours in front of your ear.

What does the operation involve?

In order to gain access to the joint, I will make a cut immediately in front of the ear. Although the cut extends from the top to the bottom of the ear, where possible it will be placed in a skin crease so that when it heals fully it will be difficult to see. Sometimes it is necessary to extend the cut from the top of the ear upwards into the hairline. Once the joint has been opened and any treatment carried out the incision is put back together again with stitches. These need to be removed around a week after surgery. At the end of the operation, a small tube may also be placed through the skin into the underlying wound to drain any blood that collects. This “drain” is usually removed on the morning following surgery.

How long will the operation take?

What can I expect after the operation?

The area in front of your ear is likely to be sore for several days after surgery. Regular painkillers will be arranged for you. It is also necessary to make sure that the area heals without any infection and so you may also be given antibiotics. Immediately after the operation your face will be swollen and feel tight, your jaw will be stiff and you will find that you cannot open your mouth widely. Bruising is variable and can last several days. Any swelling can be reduced by using cold compresses and sleeping propped upright for a few days. Most of the swelling will have disappeared after a week.

Can I eat normally after surgery?

To begin with no. For the first week or so you will only want a soft diet. You may find that your bite feels strange for a couple of weeks.

How long will I be in the hospital?

This obviously varies from person to person and depends on what sort of surgery has been performed. Most patients spend one or two nights in hospital after their operation.

This procedure is suitable if you have…

https://www.maggies.org/ Maggie’s offers free practical, emotional and social support to people with cancer and their...