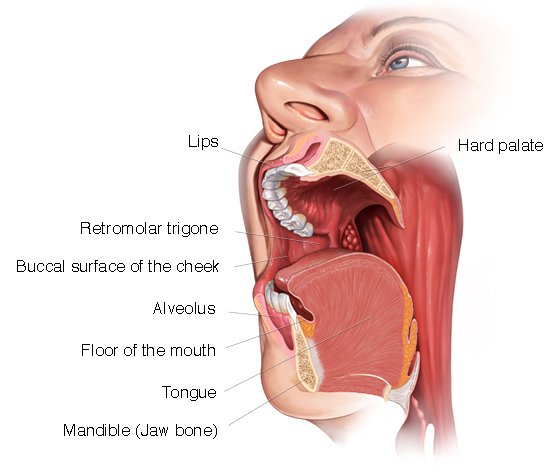 Numerous studies looking at mouth cancer have reported five-year overall survival rates of 95 and 85 percent for early stage I and II oral cancers respectively6-8. In this section, I will outline the principles of management for different oral subsites:

Squamous cell carcinomas occur more commonly than basal cell carcinomas in the lower lip mainly as a result of chronic UV radiation. Lymph node metastasis to the neck is rare unless the tumour is thick.

One study has suggested that a mean tumour thickness of 5.6mm vs 3.8mm would be more likely to result in lymph node metastasis to the neck1.

As the study only included 27 patients the prognostic significance of this is uncertain.

In general, neck dissection is not required for T1 lower lip cancers. For T2 and larger cancers dissection of levels IA and IB should be considered as it is rare for lip cancers to metastasize to lower neck levels without first invading the facial, submental and submandibular lymph nodes 2.

Cancers which arise from the upper lip and or commissure generally have a worse prognosis than the lower lip. These tumours tend to grow rapidly with invasion of the premaxilla or nasal tissues and are associated with spread to local cervical lymph nodes *25-27). Surgical resection may be complex because of the involvement of bone and need for functional as well as aesthetic reconstruction. Most defects which involve less than two thirds of the upper lip may be closed primarily whilst larger defects (up to three quarters) may be reconstructed Karapandzic 3 or Abbe-Estlander flaps.4

This is generally good with the literature reporting 10-year recurrence-free survival rates of 94 and 78 percent for stage I and II disease respectively5 .

The Floor of Mouth

Early stage floor of mouth cancers can generally be excised with preservation of the lingual nerve, if oncologically possible. Defects may be closed primarily, covered with a skin graft or free vascularised tissue such as the radial forearm free flap. Early metastasis to the neck is common with midline tumours necessitating evaluation of both sides of the neck for treatment.

I recommend surgery for tongue cancer where good function can be preserved. En-bloc partial glossectomy with or without Reconstruction can preserve speech and swallowing in early stage I and II disease with most patients returning to work in a phased manner around three months after surgery.

Historically, management of the neck in early tongue cancer has been controversial, however, it is now generally accepted that the majority of patients presenting with tumors equal to or greater than 3mm depth of invasion should have surgery in the form of a selective neck dissection incorporating neck levels one to four 9.

Buccal mucosal cancers rarely present early as they are often misdiagnosed as infection or trauma. The thin buccal mucosa allows access to the buccal space and muscle where tumours may invade deeply. Local spread to facial lymph nodes is common with particular emphasis on this area during surgery. Reconstruction may be challenging as the lining of the mouth, mandible, parotid gland and skin may be involved in an oncologically safe en-bloc resection. The radial forearm free flap provides abundant soft tissue and/or bone for oral rehabilitation post operatively. Trismus may be problematic after treatment which often includes adjuvant chemo-radiotherapy  because of the high recurrence rates 10and thus, jaw opening exercises, carried out in a long term basis will be required to maintain mouth opening.

For early stage I disease three year disease survival rates of 75-85 percent have been reported with 65 percent for stage II cancers 11-14.

The retromolar trigone is a triangular region of tissue which sits just behind the lower third molar extending upwards to the maxillary tuberosity, soft palate and anterior tonsillar pillar on the medial aspect, with continuity with the gingivae and buccal mucosa on the lateral aspect.

Small tumours may therefore invade deeply into a number of soft tissue regions as well as the bone of the mandible and hence the incidence of occult lymph node metastasis is high 15-17.

The five-year disease-free survival rate for this tumour group is approximately 70 percent 18-20.

Management is similar to lower alveolar ridge cancers with reconstruction based on the size of the defect. For large defects I prefer biological reconstruction rather than a prosthesis which does have a use in certain patient groups.

Reconstruction for Early Oral Cavity Cancer If you have stage I or II disease early...